Below is the full text of the shareholder proposal on disclosure of political spending, filed by Newground Social Investment and Investor Voice on April 4, 2018 for presentation at the 2018 annual meeting of Nike ($NKE) on September 20 in Beaverton, Oregon:

RESOLVED: The shareholders of Nike, Inc. (“Nike” or “Company”) hereby request that the Company provide a report, updated semiannually, to disclose the Company’s:

The report shall be presented to the board of directors or relevant board committee and posted on the Company’s website within 12 months from the date of the annual meeting. This proposal is not to encompass lobbying spending.

As long-term shareholders of Nike, we support transparency and accountability in corporate electoral spending. This includes any activity considered intervention in a political campaign under the Internal Revenue Code, such as direct and indirect contributions to political candidates, parties, or organizations, along with independent expenditures or electioneering communications on behalf of Federal, State, or local candidates.

Disclosure is in the best interest of the Company and its shareholders. The U.S. Supreme Court recognized this in its 2010 Citizens United decision, which said: “[D]isclosure permits citizens and shareholders to react to the speech of corporate entities in a proper way. This transparency enables the electorate to make informed decisions and give proper weight to different speakers and messages.”

However, relying on publicly available data does not provide a complete picture of the Company’s electoral spending. For example: undisclosed and unknown are any Company payments to trade associations that are used for election-related activities.

Concerned shareholders ask the Company to disclose all of its electoral spending – including payments to trade associations and other tax-exempt organizations – which may be used for electoral purposes. This would bring our Company in line with a growing number of leading companies in the consumer discretionary sector – including Ralph Lauren Corp. and Tiffany & Co. – which present this information on their public websites.

The Company’s board and shareholders need comprehensive disclosure to fully assess and regulate the use of corporate assets in elections.

THEREFORE: We urge your vote FOR this critical governance enhancement. 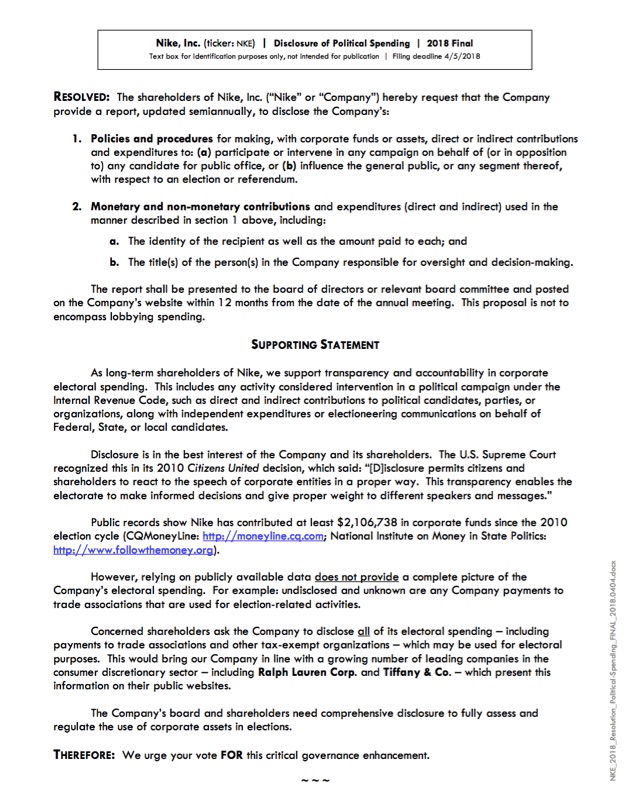