Investor Voice and Newground Social Investment have joined with a coalition of investors to back a shareholder proposal that calls on Alphabet, Inc. (parent company of Google, ticker: GOOGL) to rethink its development of a censored search product for use in China.  The shareholder resolution, led by our partners at the non-profit digital rights group Open MIC and Azzad Asset Management, urges the company to conduct a full assessment of the real as well as potential human rights impacts before deploying a search product that complies with China’s punitive internet censorship and data privacy laws.

“Google has long led the charge among its peers for a free and open internet”, said Bruce Herbert, chief executive of Investor Voice and of Newground Social Investment.  “If the company compromises those important democratic values in favor of access to the Chinese market, it could lead to significant reputational harm as well as real physical harm to dissidents and repressed ethnic and religious minorities.”  Investor Voice co-filed the Azzad resolution on behalf of a Newground client who is a long-time Google stockholder.

The project – codenamed “Dragonfly” – represents a significant about-face for the company, which elected in 2010 to stop censoring search results for users in China.  Even though reports emerged in late 2018 that the Dragonfly project had stalled, Google CEO Sundar Pichai has refused to say whether the company will continue its development and deployment.

This shareholder proposal is particularly timely, given recent reports that Google currently censors search results in Russia, and may soon do the same in India.

As stated in the shareholder proposal:

"Google employees have quit [their jobs] to avoid working on products that enable censorship; 1,400 current employees have signed a letter protesting Dragonfly. Employees said: ‘Currently we do not have the information required to make ethically-informed decisions about our work, our projects, and our employment.’ Some employees have threatened to strike. Dragonfly may also be inconsistent with Google’s AI Principles."

The resolution asks the company to publish "a Human Rights Impact Assessment... by no later than October 30, 2019, examining the actual and potential impacts of censored Google search in China.”

To read the full text of the shareholder proposal click here.

We urge all Google investors to vote FOR this important shareholder proposal.

Please download and share the graphics below to spread the word about Open MIC's shareholder campaign and to put pressure on Google to "do the right thing"1 in China. 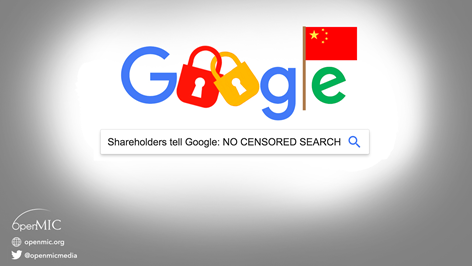 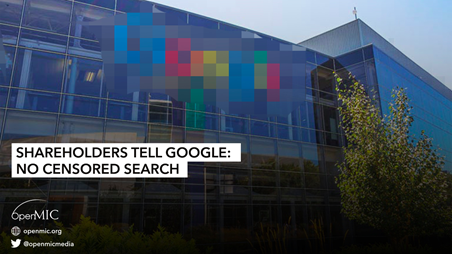 1 Google recently changed its unofficial motto from "Don't be evil" to "Do the right thing".