Benjamin Graham, the father of value investing (not to be confused with values-based investing) coined several memorable axioms that have withstood the test of time. One that has particular resonance in the current environment goes: In the short run the stock market is a voting machine, but in the long run it is a weighing machine – i.e. the short term is fueled by fear and sentiment, while the long term is guided by more substantive and reliable measures.

The sharp S&P 500 decline that began late in Q1 was closely followed by a record-breaking Q2 market recovery, all against the backdrop of a global economy in various forms of gyration.

So, what’s our outlook for the second half of the year, and how best to respond?

OUTLOOK: Because the US’s response to Coronavirus is so uneven, and in some areas noncommittal, we expect more stock market volatility ahead. While economic and jobs recovery appears to be stalling as COVID-19 cases spike across several (mostly Republican) states, on the positive side other areas are experiencing success in reopening while keeping cases in check.

There’s a veritable alphabet soup of recovery scenarios being discussed: “V-shaped”, which is quick down and quick recovery; “U-shaped”, which charts a more gradual path to recovery; and one wag’s quip about an “FU-shape”, which hopes for any path that will knock Trump out of office!

Being numbers people, we’re in the camp of expecting a Reverse Square Root Recovery as depicted in the graph below which shows a quick down, then a quick partial (or incomplete) recovery, followed by an uncertain path on from there back to eventual full recovery. 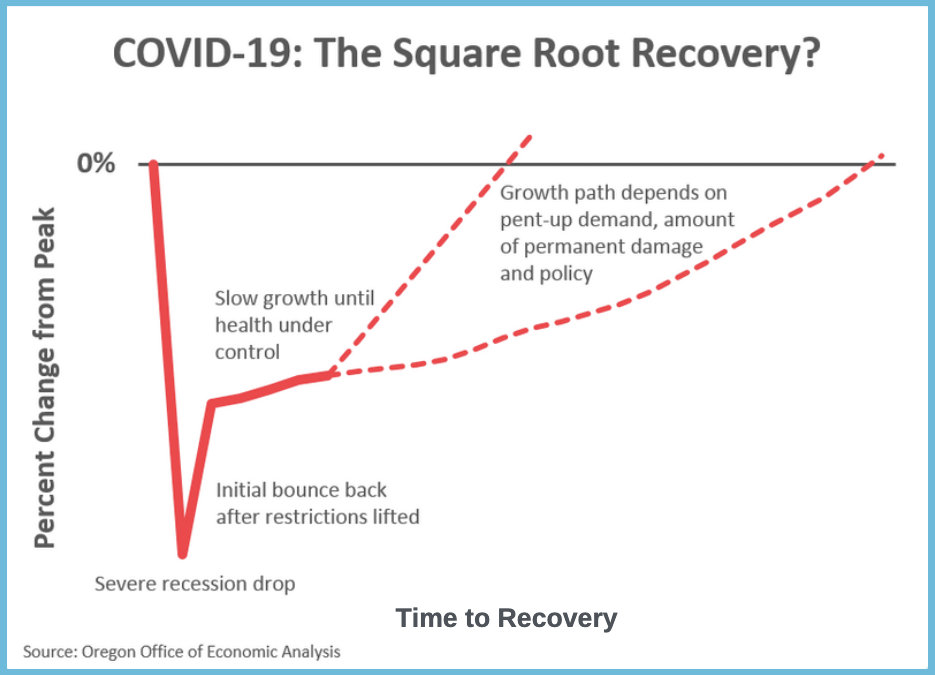 Because there’s no way to predict the timing or direction of short-term volatility (which can be either up or down), client portfolios are designed with the expectation of markets like these. In the way you wouldn’t take to sea in a rowing shell (which is designed only to go straight, over relatively calm water), we don’t invest in single-scenario type portfolios. Our portfolios are designed to weather a wide range of conditions, which creates three rather predictable outcomes:

This is all based on a simple mathematical principle: it’s easier to go down than it is to go up. We’re happy to discuss the numbers in greater detail* or you can find more on our website, but suffice it to say that Newground’s portfolios are designed and implemented with measures built-in that form a natural curb against the kind of volatility and risk we see in the markets today.