Chevron suffers many governance and reputation problems – which is why lowering the threshold to call a Special Meeting of stockholders is sorely needed.

To help address these liabilities, Newground filed a formal 'exempt solicitation' with the U.S. Securities and Exchange Commission (SEC), asking people globally to vote FOR our shareholder Proposal #10, which will serve stockholders while helping protect the environment and human rights around the world. Shareholder vote scheduled for 5/25/2022.

Highlights and rationale follow, but click here for a PDF of the original doc as submitted to the SEC. 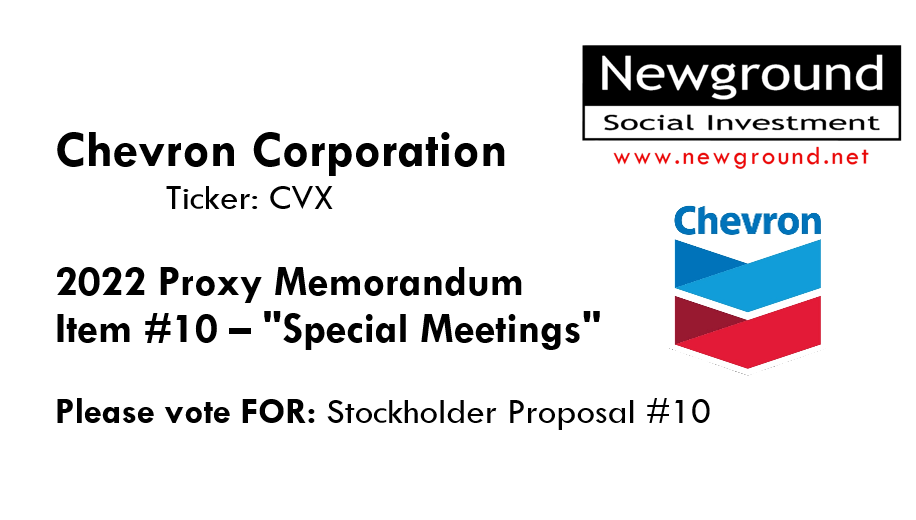 Proponents observe that management’s handling of a range of issues has increased both risk and cost to shareholders, which necessitates lowering to 10% (the ISS recommendation) the threshold to call a special meeting.

For example, a new report entitled Chevron’s Global Destruction[2] (the “Report”) is an expansive compendium of documented legal actions filed against Chevron and its subsidiaries in 71 countries.  It provides credible evidence that Chevron’s actions have destroyed critical biodiversity around the planet, and alleges that the Company is liable for $50.5 billion in judgments and seizure claims globally.

The Global Destruction report was entered into the Congressional Record[3] as part of a U.S. House of Representatives Committee on Oversight and Reform hearing entitled:  Fueling the Climate Crisis: Exposing Big Oil’s Disinformation Campaign to Prevent Climate Action.

Chevron CEO/board chair Michael Wirth was formally asked by the House Oversight Committee to respond to the Report’s findings.  Investors are concerned that despite management assertions regarding respect for human rights and adherence to environmental standards, 71% of the cases involving Chevron detailed in the Report indicate grave violations of rights to land, life, and safety.  Of these reported cases, 65% allege severe human rights abuses – including torture, forced labor/slavery, rape, murder, and genocide – in a host of countries that include:  Angola, Burma/Myanmar, Cameroon, Chad, China, East Timor, Ghana, Indonesia, Kazakhstan, Nigeria, Poland, Romania, and Thailand.

Furthermore, the Report indicates that no adequate response has been provided to the claim that Chevron has refused to comply with mandated cleanups in Argentina, Azerbaijan, Brazil, Burma/Myanmar, Cambodia, China, Ecuador, East Timor, Nigeria, Poland, Romania, Ghana, Thailand, the United States, and Venezuela.

In summary, the $50.5 billion in potential legal liability, along with the severe reputational harm arising from being linked to or responsible for widespread environmental degradation and human rights abuses, places in jeopardy: (a) our company's ability to attract and retain key talent; and (b) our company's social license to operate in jurisdictions and regions where it may wish to continue operations, or seek to expand.

2.  Risks Arising from the Ecuador Case and Judgment

Perhaps the most pressing and sizable single issue facing Chevron is the ongoing effort by Ecuadorian communities to enforce a $9.5 billion judgment[4] against the company for oil pollution (the “Ecuador Judgment”).

Instead of negotiating more than two decades ago an expedient, fair, and comprehensive settlement with the affected communities in Ecuador, Chevron has pursued a legal strategy that has cost more than $2 billion yet still exposes shareholders to potentially crippling liabilities.

In sworn testimony, Chevron Deputy Comptroller Rex Mitchell made clear that enforcement of the $9.5 billion judgment would be “disruptive” and would cause “irreparable” damage:

The seizure of Chevron assets, such as oil tankers, wells, or pipelines in any one of these countries, would disrupt Chevron's supply chain and operations; and seizures in multiple jurisdictions would … cause significant, irreparable damage to Chevron … [and] is likely to cause irreparable injury to Chevron's business reputation and business relationships...[5]

Chevron has asserted that “several international courts have determined the Ecuadorian Judgment to be fraudulent.”  However, no court since the supreme court rendered its Ecuador Judgment has reviewed the facts of the case de novo.  In reality, evidence regarding destruction of the Amazon has been entirely absent from every subsequent case – including the company's highly touted RICO declarations.

Alberto Guerra was the principal witness in the Chevron RICO trial.  He later recanted essential portions of his testimony and admitted receiving payment from Chevron – including more than $432,000 in monthly payments and $48,000 in exchange for evidence.  Guerra also admitted that Chevron’s law firm – Gibson Dunn & Crutcher – had coached him in more than 50 meetings before he testified.

CEO/board chair Michael Wirth has made public statements regarding the Ecuador Judgment that were recently challenged in a U.S. House Oversight Committee hearing where it is on record that Mr. Wirth informed shareholders “[there] was no scientific evidence of contamination.”  In subsequent questioning Wirth was asked: “[if there was] no scientific evidence … why did Texaco spend $40 million to … remediate?”

Mr. Wirth has not submitted a formal response to these House Oversight Committee questions, and has also not responded to questions around how much Chevron has spent on litigation and public relations regarding its Ecuador liability.

Besides the $9.5 billion judgment, Chevron faces a cascading series of other risks to its assets, supply chain, reputation, and business relationships.

These resources are particularly vulnerable to seizure or enforcement because there are numerous jurisdictions around the world in which plaintiffs could seek court recognition and enforcement of the Ecuador Judgment, along with other claims, including a number of jurisdictions where Chevron has substantial reserves that are of strategic importance.

As stated by Marco Simons, Legal Director of EarthRights International:

[T]he plaintiffs only need to win once or a few times, while Chevron needs to win everywhere.  Even if Chevron wins twenty cases, just one loss could cost the company hundreds of millions or billions of dollars.[6]

The company's refusal to negotiate expedient, fair, and comprehensive settlements with the affected communities in Ecuador and elsewhere exposes stockholders to enormous and material financial, legal, operational, and reputational risks.

In light of these serious considerations – which evidence a need for heightened accountability in Chevron’s board room and C-suite – shareholders would benefit from adoption of a reasonable 10% threshold for calling a special meeting.

[4]  Now calculated to be roughly $12.5 billion, due to penalties and interest since being rendered.