The year's proxy season kicked off today with the publication of ICCR’s 2019 Proxy Resolutions and Voting Guide. The Guide presents some 250 shareholder proposals that have been filed or co-filed by members of the Interfaith Center on Corporate Responsibility (ICCR), that address a wide range of ESG (Environment, Social, and Governance) issues – on such diverse topics as political spending disclosure, climate change, human rights, diversity & inclusion, immigration, and data privacy.

ICCR staff and member colleagues presented the Guide to investors and to media in this global webinar – which included a shout-out to Investor Voice Chief Executive Bruce Herbert, for his highly successful work on transparency in corporate political spending.

The largest group of proxy resolutions sponsored by ICCR members this year – 50 of the roughly 250 filed as-of January – concerns disclosure of political spending, particularly potential “dark money” contributions that are untraceable, such as dues to trade associations and nonprofit 501(c)(4) “social welfare” groups like the U.S. Chamber of Commerce and ALEC (the American Legislative Exchange Council). For more than a decade, Newground Social Investment and Investor Voice have filed shareholder proposals that call for increased transparency in political spending.  In fact, five of the shareholder proposals filed by Newground and Investor Voice for the 2019 proxy season call on companies to expand transparency in their political contribution activities.

One of these, a proposal to General Electric (GE), has already resulted in a major victory for transparency and good corporate governance. In January, following discussions with Investor Voice and our partners at the Center for Political Accountability and the NY State Office of the Comptroller, GE agreed to 100% of our requests, which resulted in a dramatic increase in the company's public disclosure, and in response we withdrew the proposal. It is our hope that many more companies will see the wisdom of openness and transparency and follow GE’s lead. 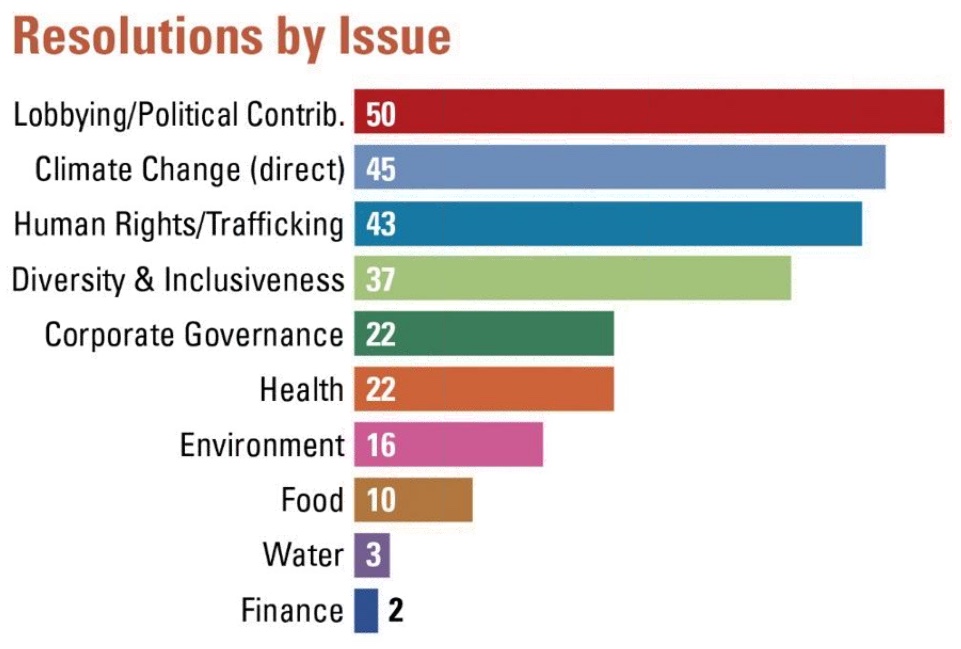 Climate change remains another major issue of concern for ESG investors. This year, 45 proxy resolutions call on companies to address their climate impacts. Proposals include setting greenhouse gas reduction targets in line with the Paris Climate Agreement, reducing methane emissions, and increasing renewable energy production. Three proposals call on major banks to reduce the carbon footprints of their loan and investment portfolios. Several other proposals call on companies to end their anti-climate lobbying and political spending.

Another highlight of this year’s proxy landscape is a particular focus on our Seattle neighbor, Amazon. This year, Amazon displaced ExxonMobil as receiving the largest number of shareholder proposals of any American corporation. According to the Guide: “[ICCR] members led ten resolutions urging Amazon to address its [business] risk exposure across a number of issues, including the potential misuse of its facial recognition software, how it is addressing hate speech on its platforms, its greenhouse gas emissions reductions goals and how it is addressing potential forced labor in its supply chain and more.”

As longtime Amazon shareholders, Newground fully supports each of these proposals and intends to vote our clients’ shares in favor of them. One Investor Voice proposal, filed on behalf of a Newground client who was a very early Amazon employee, calls on the company to end so-called "Formula Swapping", and to embrace a fair simple-majority voting standard that does not discriminate against shareholder interests.

ICCR has been a driving force in the shareholder engagement movement for nearly 50 years, and Newground Social Investment and Investor Voice have been active members for as long as we’ve been in business – 25 of those fifty years.  In fact, Newground's Bruce Herbert co-founded and was first director of the NW Coalition for Responsible Investment, kind of the 'northwest arm' of ICCR, and he served many years on ICCR's Governing Board.

Newground and Investor Voice wholeheartedly support the shareholder proposals presented by fellow ICCR members, as detailed in this helpful Guide, and we encourage investors of every stripe to join us in doing the same.

ICCR hosted a Proxy Season Overview webinar today to herald the release of its Guide, which can be viewed below. Bruce Herbert and Investor Voice are celebrated by one of the presenters, for their work on corporate disclosure of political spending and a very successful General Electric (GE) negotiation: